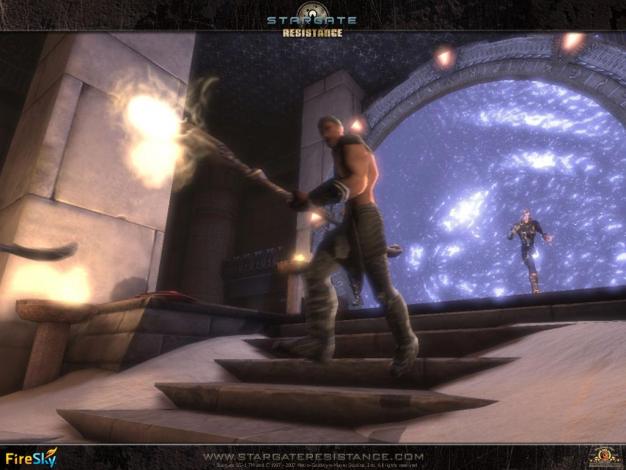 Gamesindustry.biz reports that US developer Cheyenne Mountain Entertainment has filed for Chapter 11 bankruptcy protection.  The developer group is known chiefly for its Stargate licence (it has already made Stargate Resistance and is apparently continuing work on the forthcoming MMO Stargate Worlds).
This news itself comes from a statement made on CME’s Stargate forum, which is here.  Contrary to what Gamesindustry says, it is not actually clear from the statement whether CME has entered Chapter 11, or just its subsidiary Firesky, the actual developer of Stargate Resistance (if it turns out just Firesky is in Chapter 11, we’ll update this post).  Leaving that to one side, the statement is a useful summary explaining what Chapter 11 bankruptcy protection actually is and why a company would need it:
“Cheyenne Mountain’s corporate structure has undergone some dramatic changes in the last few weeks, and that has resulted in various actions such as the filing for Chapter 11.
“Certain parties believed that was the right thing to do, other parties do not and this is still being evaluated and may be rescinded. Even if the bankruptcy should go through, however, Chapter 11 simply allows a company to restructure its debt to a manageable plan approved by the courts. It does not absolve a company of debt, and it does not shut it down or otherwise affect its daily operations.
“This will all be sorted out in the legal and proper manner, and all of us on the development side of things hope it’s done as quickly as possible. That said, our entire staff is in-house working on upgrades and expansions for Stargate Resistance, and we continue to be motivated and excited by the response we’ve received from our customers.”
So:
The closest UK insolvency procedure to Chapter 11 is called administration (more info at Wikipedia, with the usual Wikipedia caveat), another statutory scheme intended to help a company in financial difficulties to trade through its problems and come out the other side.  Example: last year UK developer Oxygen Games went into administration.
As always, happy to discuss furth if anyone is so foolish as to want more information, do let us know…
In the meantime, here’s hoping Cheyenne can indeed trade through and keep up work on Stargate Worlds (they’d probably get my subscription if they did, plus plenty of folks too I imagine…)
Post-script: Cheyenne Mountain Entertainment to sue its former Chairman
CME has also decided to sue its former Chairman & CEO, Gary Whiting, according to a statement on its web site:
“Mr. Whiting and Garvick [a company controlled by Whiting] purchased various securities from the Company and its subsidiaries and has failed to honor the terms of these purchases and has failed to pay the payments when due; therefore, the Company and its subsidiaries have foreclosed on the collateral securing Mr. Whiting’s and Garvick’s obligations including all shares and units owned by Garvick and Garrick Enterprises, LLC.

The shareholders and board of the Company have removed Mr. Whiting as a board member and as an officer and terminated his employment with the Company and any of its subsidiaries. The Company has joined the litigation against Mr. Whiting for alleged wrongdoing.

“
Oh dear.  So the allegation seems to be that Whiting used his position to purchase company assets either personally or through his company Garvick, or in somehow made Cheyenne responsible for his/Garvick’s liabilities, which somehow Cheyenne has now found out about.  This of course raises the question as to why Whiting would have been removing company assets, which hopefully the litigation will explain in due course.
One final point: the press statement also says “It is uncertain at this time what the affect of Mr. Whiting’s actions and the pending litigation will have on the Company’s operations and financial condition.”  But the press statement we talked about about said “the company” was going to enter Chapter 11.  So is Cheyenne in Chapter 11 or not?
Follow us at www.twitter.com/gamerlaw!