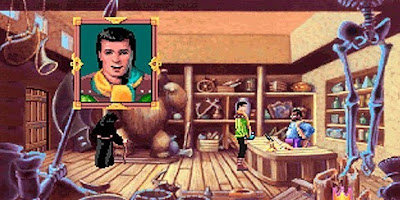 In a nutshell: the King’s Quest games series was in games limbo, some fans tried to rescue it and make a fan sequel, they did it in the right way legally, but Activision has now decided to shut them down.  Shame.  Still, this is another example a simple but useful lesson for anyone wanting to make a fan-mod/sequel for a game: you have to seek the rights holder’s approval before you make the mod/sequel.  Read on for more… (sources: Joystiq and SPONG)

Remember seminal adventure game series King’s Quest by Sierra?  It was awesome, but as with so many games in the Nineties, somehow it fell into games limbo.  Sierra went through various corporate shenanigans and by the early Noughties ended up being owned by Vivendi, which sat on the King’s Quest IP.

Then, along came Phoenix Online Studios, who wanted to make a King’s Quest fan sequel eventually called The Silver Lining.  They could have just started making the game themselves, as so many modders/fans do, but unless you first have the rights holder’s approval then making a fan sequel/mod means you open yourselves up to an IP infringement lawsuit (there may be IP defences available in your jurisdiction, e.g. fair use, but that wouldn’t necessarily cover you completely and, anyway, why take the risk?)  It seems that initially Phoenix did just that, working away at The Silver Lining and presumably hoping to get away with it.  But, in 2005, they received a cease and desist letter from Vivendi.  So, Phoenix then did the right thing legally by asking Vivendi’s consent for them to make The Silver Lining.  This led to an arrangement being reached with Vivendi that would allow the game to go ahead.  So far, so win.

Activision, it say NO!

But, fast forward to the present day (ish) and we remember of course that Vivendi had a $18bn merger with Activision, meaning it no longer called the shots in the Sierra titles.  Activision later said that it wasn’t particularly interested in the Sierra legacy titles it had acquired, including King’s Quest.

It seems that Phoenix tried to negotiate with Activision for the future of Silver Lining, but it didn’t work out.  As Phoenix announced today:

“After talks and negotiations in the last few months between ourselves and Activision, they have reached the decision that they are not interested in granting a non-commercial license to The Silver Lining, and have asked that we cease production and take down all related materials on our website.”

This suggests that the non-commercial licence that Vivendi had granted to Phoenix terminated on the Vivendi/Activision merger (this may have been an express term of the licence, or possibly was a side-effect of a corporate reorgnisation following the merger).  Either way, Activision considered itself no longer bound by the licence and decided, as it is entitled to do as the King’s Quest rights holder, not to renew the licence.  This of course means that Phoenix cannot continue to make The Silver Lining without the risk of an Activision lawsuit.  So, hence Phoenix Online decision that:

“Sadly, after eight years of dedicated work and even more dedicated fans, The Silver Lining project is closing down.

Again, thank you all so much for everything. This has been a long and crazy road, full of more twists than we could’ve anticipated, but more triumphs and wonderful memories than we could’ve ever hoped for. And for that, to all of you and to everyone on our team, we will always be grateful.”

We can only guess why Activision refused to grant a licence to Phoenix.  The most likely reasons imo are:

These kinds of factors are always going to come up in situations where any dev/publisher holds the rights and a third party wants to use them, even if it’s for the non-commercial purpose of making a fan-sequel/mod just for the love of the game.  Think about it from the right’s holder perspective: even if you’re not doing anything with the title, why would you give control of it to someone else over whom you have limited control and probably don’t expect to get any money?  It’s a shame, and no doubt the King’s Quest fans and gamers generally are disheartened at Activision’s decision, but when games, law and business collide, you don’t always get the result you might have hoped for.

Still, that doesn’t mean that every attempt to make a fan-mod or sequel will go the same way…


Lessons for fans who want to make a fan-mod or sequel of a game: